It takes courage to stand up to Big Oil in Alaska 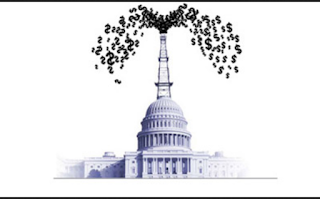 The pressure on Alaska's elected officials to conform to the Fossil Fuels Forever narrative is intense and it takes humongous courage to go against it.

But that's what happened last week.

In a largely symbolic act, Alaska's legislature passed a resolution calling upon the federal government to open oil and gas leasing in the coastal plain of the Arctic National Wildlife Refuge.

Senators Tom Begich and Elvi Gray-Jackson also said no.  Senator Begich's views on climate change are well known and he was joined by Gray-Jackson who stated she was unwilling to vote for the resolution without language calling for protection of northern caribou herds.

These five state legislators, fewer than 1% of Alaska's elected officials, understand the gravity of climate change enough to just say no to expanding fossil fuel development.

The conventional wisdom is that voting against the interests of the 'hand that feeds' can be fatal to political careers in Alaska (and indeed, in a  fossil fuel funded rant, Rep. Tarr was publicly attacked for her vote). 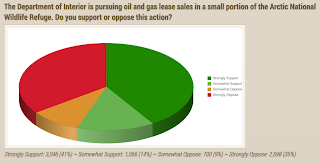 The Senate's own 2019 Web Poll, found that 35% of Alaskans "strongly oppose" and 9% "somewhat" oppose opening ANWR to oil and gas leasing compared to 41% and 14% respectively that support or somewhat support it (see the chart).

Yet, only 1% had the chutzpah to vote with the people of Alaska.

The signs are everywhere that we've reached a tipping point on public opinion on climate change.

But the biggest catalyst of all was the UN Intergovernmental Panel on Climate Change (IPCC) report, released in December, giving humanity just over 10 years to avert catastrophic climate change.

Extreme weather reports keep pouring in from Alaska's Front Line communities.  Last fall the cold pool in the Bering Sea collapsed and for the second year in a row, they had no sea ice in the middle of winter.   Patience is running thin.  People are, rightfully, angry.  These are signs the tide is turning, not only against our friends in coastal communities, but against their elected "leaders" who refuse, out of fear, vested interests, or dirty $ in their pockets, to stand up to Big Old Energy interests that keep Alaskans locked into a dying past. 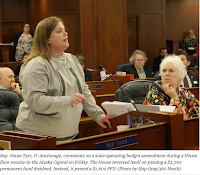 A landmark study by McGlade and Ekins found that globally, a third of known oil reserves, half of known gas reserves, 80% of current coal reserves and all unconventional and new fossil fuel -- including resources in the Arctic -- must remain unused if we are to avoid catastrophic climate disruption.

In other words, the time has come for Alaska to let the fossil fuel spigot run its course, bump up our per barrel share and inject it into building a New Energy Future, starting with communities most dependent on oil revenue first.

Difficult times call for great leadership.  Representatives Hannan, Wool, Tarr, and Senators Begich and Gray-Jackson deserve our thanks.   May they be the tip of a rising spear of political will sharp enough to induce real action on the Front Lines of climate change in 2020.
By Ceal Smith - March 16, 2019 No comments: