·       I’m speaking today on behalf of the Alaska Climate Action Network, a statewide grassroots network of scientists, policy and renewable energy experts, partner groups and Alaskans from all walks of life who are worried about the increasingly dangerous and costly impacts of climate change, especially in rural Alaska.

·       I would also like to thank the Commissioners French, Foerster and Seamount for granting this hearing in response to Kate Troll’s request and the 48 Alaskan’s who signed the petition at our Climate, Jobs & Justice rally in Anchorage on Sept 8th.

·       Since then, nearly 300 more Alaskan’s have joined in our appeal to the AOGCC Commission to do everything in your power to reduce Alaska’s GHG emissions (petition attached).

·       I won’t repeat what others have already spoken to, but I would like to address Kate Troll’s question: “What is the track record for full compliance?”

·       On November 18th Kristen Nelson reported in the Petroleum News[1] that:
1.     The commission revised its flaring regulations effective Jan. 1, 1995. “The goal of the flaring oversight program is the elimination of unnecessary flaring whenever possible, and

2.     The commission’s current regulations allow no gas release except for up to an hour for emergencies or operational upsets or for planned lease operations authorized for safety; to purge or test a safety flare system; and de minimus venting incidental to normal operations. The regulations also say the commission can authorize flaring for more than an hour under specific circumstances.”

·       We looked at the data, and here is what we found (disclaimer: we are not OG experts):
o   First, according to the 2018 Alaska Greenhouse Gas Emissions Inventory Report[2] that “describes and quantifies human-caused sources of greenhouse gas (GHG) emissions occurring between 1990 and 2015 from Alaska operations and facilities” the oil and gas industry contributed an average of 52% of Alaska’s total GHG emissions equal to 44.5 million metric tons of carbon dioxide equivalents (MMT CO2e)/per year or a cumulative total of 552 million metric tons of carbon dioxide equivalents. 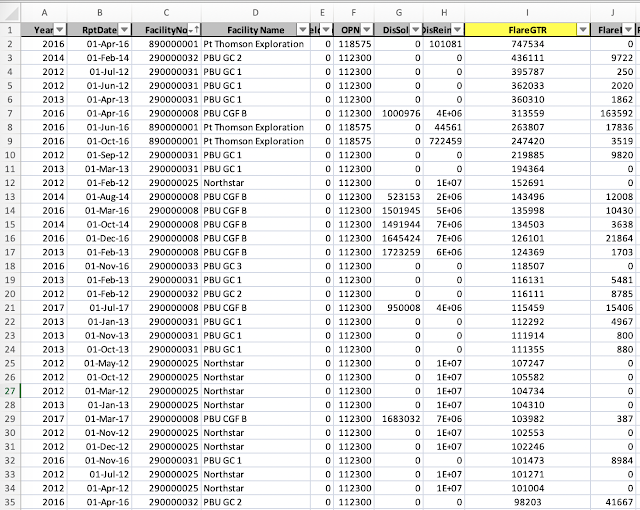 ·       As quoted in Petroleum News above and according to rule 20 AAC 25.235:
·       Section(d): Gas released, burned, or permitted to escape into the air constitutes waste, except that (1) flaring or venting gas for a period not exceeding one hour as the result of an emergency or operational upset is authorized for safety;

·       We haven’t yet received all the documents requested in our Public Information Request, so we were unable to compare the gas disposition report form’s 10-422 (FACILITY REPORT OF PRODUCED GAS DISPOSITION) against the Xcel spread sheet data to determine if these were authorized releases.  Even if we had as a small nonprofit, dependent on volunteers, we don’t have the expertise or capacity to do the analysis (and we might well be off in the above calculation!).  So in the end, we are left with more questions than answers, including:
·       Do these SUBSTANTIAL emissions fall under authorized emergency and normal operations and maintenance, or is something else going on?
·       In addition to the 1400+ releases greater than hour, we did not see where industry reports vented gas (i.e. methane).  The state GHG report (page 21) notes that:
§  In 2015, the industrial sector produced over half of Alaska’s GHG emissions. Fugitive methane contributed over 19% of the CO2e emitted by this sector in 2015. Most of the fugitive methane comes from oil production; a small portion comes from natural gas production.
·       Thus, how does the AOGCC track the more powerful methane GHG?
·       Additionally, we’d like to know how AOGCC data feeds into the state calculations of total GHG emissions, as required by the Federal Greenhouse Gas Reporting Rule?  (we’re essentially trying to relate the GHG report to industry disposition data),
We would very much appreciate answers to these questions!

It’s important to note that these GHG emissions carry with them a whole suite of hazardous pollutants, including volatile organic compounds that have serious direct and indirect community and environmental health impacts[4], including cancer, neurological, developmental and reproductive effects and the capacity to disrupt critical endocrine hormones.

In closing, as Bjorn Olsen with Alaskans Know Climate Change and I wrote in a recent OpEd[5] (and it deserves repeating):  “our civilization has little more than a decade to rein in greenhouse gas emissions or face a series of cascading ecosystem and economic collapses”.  We urge you, as our duly appointed and trusted AOGCC commissioners, to do absolutely everything in your power to reduce waste, in the form of dangerous greenhouse gas emissions.

The biggest emitters are the Prudhoe Bay Unit Gathering and Flow Stations, but Cook Inlet is also a significant contributor.

Precedence/Case history (from the 50-report):

“In 1970 alone, nine billion cubic feet of gas were flared from just one Cook Inlet oilfield, Granite Point,” “It was a huge amount of energy just going up in smoke,” recalls Norman, who is currently a Commissioner of the AOGCC.

The public [then, as now] was solidly on the side of the Commission. The gas flares could be seen from Anchorage on a clear night, and they became symbols of what the public considered to be wasteful practices.

In 1971, following extensive hearings, the Commission ordered an end to the wasteful flaring of gas produced along with oil from Cook Inlet platforms, except for what was needed for safety flares on the platforms.  The Alaska Superior Court upheld the authority of the AOGCC in its action to prevent waste[7] and (according to the 50-year “Our resources Our past Our future” report[8]). The Commission's ban on gas flaring was extended to Prudhoe Bay when this giant North Slope field began production in 1977.

Any gas flared after the order, except for the safety flare, was determined to constitute “waste” of the natural gas resource and was prohibited.

“The companies didn’t want to stop flaring. They claimed there was no market for the gas and that it had no value.” But when forced to do so, the producers did find ways to use the gas beneficially.

§AS 31.05.027 gives AOGCC authority over all land in the state of Alaska lawfully subject to its police powers, including Federal lands,

§AS 31.05.170(15) defines “waste” in addition to its ordinary meaning, “physical waste” and includes the inefficient, excessive, or improper use of, or unnecessary dissipation of, reservoir energy; and the locating, spacing, drilling, equipping, operating or producing of any oil or gas well in a manner which results or tends to result in reducing the quantity of oil or gas to be recovered from a pool in this state under operations conducted in accordance with good oil field engineering practices; the inefficient above-ground storage of oil; and the locating, spacing, drilling, equipping, operating or producing of an oil or gas well in a manner causing, or tending to cause, unnecessary or excessive surface loss or destruction of oil or gas; and other producing oil or gas in a manner causing unnecessary water channeling or coning; the operation of an oil well with an inefficient gas-oil ratio; the drowning with water of a pool or part of a pool capable of producing oil or gas; underground waste; the creation of unnecessary fire hazards; the release, burning, or escape into the open air of gas, from a well producing oil or gas; the use of gas for the manufacture of carbon black; and the drilling of wells unnecessary to carry out the purpose or intent of this chapter; and

20 ACC 25.235. Gas disposition. (a) For each production facility the operator shall compile and report monthly gas disposition and acquisition on the Facility Report of Produced Gas Disposition (Form 10-422). If a facility's production comes from multiple pools, the operator shall allocate production between each producing pool as a percentage of the total volume of gas that the facility handled for the month. The operator shall report gas acquisition or disposition by category, as follows:
(1) gas sold;
(2) gas reinjected;
(3) gas flared or vented* (form does not require separate flaring and venting disclosure);
(4) gas used for lease operations other than flaring or venting;
(5) natural gas liquids (NGLs) produced;
(6) gas purchased;
(7) gas transferred;
(8) other.