Blasting Barriers to the AK Road to Renewables: an elegant solution 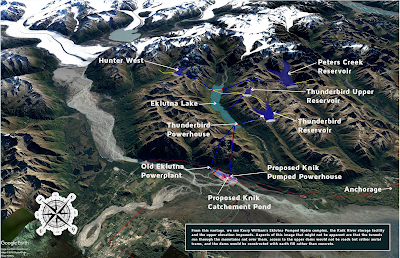 A major roadblock to moving Alaska's Railbelt electric grid forward on renewable energy has been the absence of cheap backup power required to match intermittent generation from solar and wind.

For example, the Regulatory Commission of Alaska (RCA) recently rejected a request from Fairbanks Golden Valley Electric Association to add more wind energy from Delta Junction on the basis that it was too costly.

Delta Wind claims that GVEA is demanding excessive fees, but according to Petroleum News:


The contentious issue of adding wind power to the Alaska Railbelt power transmission grid revolves around the cost of integrating the wind power into the system, the economic impact of displacing other power sources, and the environmental and cost stability benefits of adding wind power to the system. Wind power presents a challenge to an electricity utility, because the generated power fluctuates with the vagaries of the varying wind strength. That fluctuating power must be counterbalanced by equal and opposite fluctuations in some other power source, such as a gas or oil-fired power station. This regulation of the wind power costs money.

In another recent case, RCA ordered Chugach Electric (also on the Railbelt) to withdraw its request to add more wind from Fire Island on similar grounds.

In an OpEd last year, Robert Seitz, former chair of Alaska Section of the Institute of Electrical and Electronic Engineers, nailed the problem and need for a storage solution:


Before we shut off our hydrocarbon fuel supply and cheap electricity, we need to develop long-term energy storage means and mechanisms while we can still afford the development costs. This needs to become the focus of our long-term energy policy. Our power systems need to be looked at as systems, and not just as collection sources tied to the utility.

Kerry Williams, a founding member of AK CAN! and Smart Energy Roadmap working group member has come up with an elegant solution that could blast the storage barrier to smithereens. 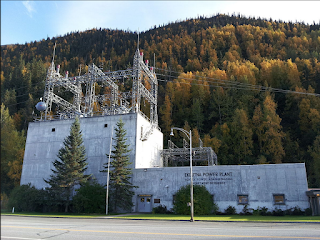 In a nutshell, Kerry is proposing to expand the existing Eklutna Hydroelectric Power Plant by upgrading the two existing turbines and adding a series of new high-elevation storage reservoirs using excess solar and wind energy to pump water uphill.  In addition to lots of green jobs, cleaner air and eliminating the need for expensive fossil fuel, the project would restore the lake to historical levels, a big boost to efforts to bring anadromous salmon runs back to Eklutna Lake.

You can read about the whole, wonderfully elegant idea here on the story-site created by intrepid Fat Bike explorer, founder of Alaskans Know Climate Change, film-maker and AK CAN! partner Bjorn Olson.   And check back.  The Eklutna Pumped Hydro Storage story-site is designed to evolve as this elegant proposal unfolds.

Coming up next: an update on barriers to creating a Unified System Operator (USO) for Alaska's Railbelt grid also touched on by Robert Seitz and more recently by Tim Bradner in the Anchorage Press.