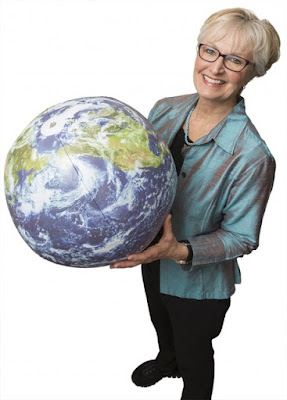 A timely special event at “Crossroads: There is No Planet B”, an art installation at Side Street Espresso, 412 G Street, Anchorage, AK.

Distinguished Alaskan Fran Ulmer has played many roles in service to the people of Alaska—from Lieutenant Governor to Mayor of Juneau to Chancellor of UAA.   Ulmer has had global influence on issues relating to the Arctic and recently stepped down as the Chair of the US Arctic Research Commission.

Merculieff had a traditional upbringing and a Western education, earning a BA from the University of Washington.  He has served as Chair of the Indigenous Knowledge Sessions of the Global Summit of Indigenous Peoples on Climate Change.  He has also served as co-founder of the Indigenous Peoples Council for Marine Mammals, the Alaska Forum for the Environment, the International Bering Sea Forum, and the Alaska Oceans Network.  Merculieff is currently the President of the Global Center for Indigenous Leadership and Life Ways.

Rosen was born and raised in Washington, DC and came to Alaska in 1987 to work for The Anchorage Times.  After the grounding of the Exxon Valdez, she started stringing for Rutgers and that turned into a full-time job she has held for more than twenty years.  In 2013, she started working at The Alaska Dispatch in what was then a newly-created job: Arctic Editor and reporter.  She has since reported for the Bureau of National Affairs (now known as Bloomberg BNA), the Christian Science Monitor, and a number of magazines.  Rosen has a BA in History and Economics from the University of Virginia and an MBA from the University of Colorado.  No science degrees, but she did take a lot of math courses!  She was a Journalism Fellow at the National Center for Atmospheric Research in Colorado and the Metcalf Institute for Marine and Environmental Reporting in Rhode Island.

Donart is the Citizen Climate Lobby Anchorage group leader, as well as Alaska State Coordinator for Citizens Climate Lobby.  As a commercial fisherman in western Alaska, Donart has long been concerned about the effect that oceanic acidification and climate change have had on salmon and those who rely on them.  He is also a retired teacher.  In his life, he has planted 330,000 trees and counting!  The Citizen Climate Lobby is a national non-profit, non-partisan organization promoting a carbon-fee and dividend solution that has broad-based support among economists and policy analysts.  Both climate scientists and economists say is this plan is the best first step to reduce the likelihood of catastrophic climate change from global warming.

Smith has worked as a field biologist, writer, environmental compliance expert, researcher, energy and climate policy analyst and organizer since the mid-1990s.  She is Chair of the Alaska Climate Caucus and founded the grassroots Alaska Climate Action Network (AKCAN!) in 2014 to work on climate and energy issues on the front lines.  She has an MSci in Ecology and Evolutionary Biology from the University of Arizona and a BA in Sustainable Development and Environmental Policy from UC Santa Cruz.  Smith was recognized as a Credo Climate Hero in 2015.

All panelists are available for interviews.
By Ceal Smith - August 18, 2017