An Alaskan roadmap to 100% Renewable Energy

By Eric Schaetzle & Ceal Smith
Historically, when renewable energy becomes a cost competitive option people make the switch from fossil fuels. Today, many US cities, like Burlington, Aspen, and Juneau meet a significant percentage of their energy needs from hydropower, a technology that became cost effective long ago. Wind power improved later, allowing other cities, like Greensburg, KS, to tap into this rapidly growing market.[1] Today the most recent and rapid growth is in solar. The prediction is that it will meet an increasingly large percentage of energy demand in the future as entire cities and regions move toward renewable energy.[2],[3] The emergence of SolarCity and other big players in the renewable energy scene illustrate the tremendous growth opportunities for private industry. As improvements in renewable energy continue, improvements in building performance, weatherization, and energy conservation and efficiency compliment them.[4],[5],[6] The potential for Alaska to realize gains in these areas as well has been widely recognized.

Seven years ago, in January 2009, Gov. Palin asked Alaskans to focus on obtaining 50% of our electric generation from renewable sources by 2025,[7],[8] an announcement that accompanied the release of a new document from the Alaska Energy Authority titled "Alaska Energy: A first step toward energy independence."[9] Unfortunately, Alaska Energy didn't provide a road map for how to reach this goal. At the time, Alaska's "50 by 2025" goal was on the cutting edge; suggesting a higher target of 100% renewable energy would have been dismissed as not only impractical, but impossible to reach. Yet a few years earlier, in 2007, Kodiak Island, Alaska began a multi-phased, step by step approach that by 2014 culminated in their electric grid generating 99.7% of it's power from renewable energy sources.

Today, advancements in clean energy and integration technologies (known as “smart grid”) have spurred explosive growth in the number of cities, states, and countries planning and working toward 100% renewable energy goals.  Those of us watching from the sidelines have been forced to revise our beliefs about what is possible. It no longer takes a visionary to embrace such a goal, just a leader with enough common sense to see where the world is headed.

In 2015 the "Solutions Project," led by Mark Jacobson at Stanford, did in fact create a 100% renewable roadmap for Alaska. The plan identifies energy sources of 70% wind, 15% hydro, 7% geothermal, and 6% solar to enable a staged shift in all energy sectors (electricity, transportation, heating/cooling, and industry) to renewable sources.[10] Jacobson's plan includes a 30% decrease in power demand gained by converting from combustion to electricity and end-use energy efficiency improvements. It also accounts for electricity and heat storage.[11] Since Alaska has a solar resource comparable to Germany (Fig. 1), currently the fifth largest producer of solar energy in the world,[12] Jacobson's proposed energy mix could be adjusted to include a higher ratio of solar. Erin Whitney at the Alaska Center for Energy and Power, for example, has noted that "solar is the most untapped resource in our state."[13] As prices for PV panels drop, solar energy generation has grown considerably across the state, from the Northwest Arctic Borough to Copper Valley.[14] In Fairbanks, for example, the Golden Valley Electric Association is exploring a community solar project.[15],[16]

There are other examples of what a more developed plan to move to 100% renewable energy might look like. San Diego energy expert Bill Powers developed one such plan for four heavily populated Bay Area Counties in California.  Bay Area Smart Energy 2020 (BASE)[17] uses proven low cost technologies to convert the electric grid to renewable sources through energy conservation and efficiency, demand response, and local, distributed renewable energy supplemented by a few strategically placed utility-scale renewable energy projects and community scale storage. Clearly, there are substantial differences between the climates of Alaska and California. We can't "copy and paste" the BASE 2020 plan for our state, but otherwise Powers' nuts and bolts approach is what we need in Alaska.

The litmus test for an Alaskan renewable energy plan will be its ability to deliver power under the most demanding conditions, such as an Alaskan winter, but other Arctic regions haven't found this to be an obstacle. As part of a "Neo Carbon Energy" project, Christian Breyer and associates from the Lappeenranta University of Technology in Finland, at a similar latitude as Alaska, created an economically viable 100% renewable energy plan that relies on a highly flexible system design and dramatic increases in wind and solar generation capacity.[18],[19],[20] Recently this same team completed renewable energy system modeling for Russia, and found it to be one of the most energy-competitive regions.[21]  Similarities between Finland and Russia and the climate and geography of Alaska are apparent.

In fact, the Alaska Energy Authority found that Alaska has "some of the best renewable resources in the world" and collaborated with the Renewable Energy Alaska Project to create a "Renewable Energy Atlas of Alaska."[22] They identified four distinct geothermal resource regions suitable for large-scale geothermal power projects.  Alaska has over 90% of the nation's river current and tidal energy resources.  Western and coastal regions of the state have wind resources that are rated "excellent" and "outstanding."[23]

Geothermal and hydroelectric energy are “base load” -- that is they produce the minimum amount the electric grid has to have to operate at any given time.[24] Combined with wind, solar, energy storage, greater efficiency, improved high-voltage direct current (HVDC) technology,[25] and demand response, Alaskans would have no problem getting through the harshest winters. Evidently, such was also the conclusion of the Finnish researchers for their country.

The obstacles to a 100% renewable energy plan are not the cold and dark of winter, but rather, policies that disincentivize renewable power generation[26],[27] and limit demand response. Thankfully, the Regulatory Commission of Alaska is looking to restructure the Railbelt grid with the creation of an Independent System Operator that would dispatch energy more efficiently and set a universal transmission tariff.[28],[29],[30],[31]

Today the energy sector is driven more by improvements in technology and shrinking costs than improvements in resource extraction. Consequently, economic growth is no longer dependent on fossil fuel production. The shift has only begun to ripple across the globe, though we are feeling its direct effects here in Alaska. If we remain bound to the older model of extraction, we will miss being part of the emerging economic development paradigm.  We don't have a roadmap to a 100% renewable future yet, but that's not for lack of reason, and it's becoming increasingly apparent it's not for lack of ability either.

The clear message of the Paris agreement is that the age of fossil fuels is drawing to a close. Policies that internalize the environmental and public health costs of carbon pollution, such as carbon pricing schemes and, in the US, the Clean Power Plan, will favor renewable energy and spur investment in and development of clean technology, promoting greater adoption and lowering costs.[32] It's important to take into account these current and future changes to tax and energy policy when considering what our future energy infrastructure should look like. 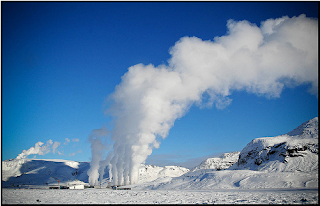 The research and technical experience in putting a renewable energy plan into practice could expand our growing role in the $20 billion global industry in next generation clean technology as other regions of the globe move in the same direction. Recognizing this potential for their own country, Iceland built a knowledge export economy around geothermal resources.[33] To date, 144 countries currently have renewable energy policy targets.[34]  With no sign of this trend slowing,[35] Iceland made a wise investment.

Even without a mandatory goal or policy incentives, renewables are expanding in Alaska.[36] In 2014, we produced 28% of our electricity with water, wind, and other renewable energy sources.[37] Between 2007 and 2014 we saw a 20-fold increase in wind power generation.[38] Through the vision of its residents and collaboration with industry leaders, Kodiak residents saved millions in annual fuel costs and lowered ratepayer electric bills when they reached 99.7% renewable power generation. Residents are now beginning to switch from oil to electric heat pumps to heat their homes.[39],[40] In Kotzebue, wind power is already providing 20% of average electricity demand, saving the community $900,000 in 2014 alone.[41] There are many more examples besides these. 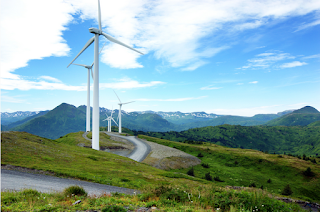 According to the Alaska Center for Energy and Power, more than 70 of Alaska’s 200 microgrids have integrated renewable power into the mix,[42] and there's plenty of room left to grow. In their recent Alaska Dispatch News commentary, Meera Kohler and Gwen Holdmann pointed out that Alaska has "the highest per capita investment in renewable energy technology of any state."[43] This research is driven, in part, by the overarching vision of reaching our "50 by 2025" goal and a desire to lower the cost of energy for all Alaskans.

One thing is obvious, whether we have a roadmap or not, this is the direction Alaska is moving. But without a plan the process of transformation will take longer and be less efficient. 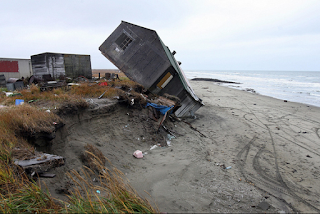 As Alaska reels from climate change and collapse of the oil markets, now is the time to embrace a 100% renewable energy goal. By make a binding commitment we guarantee a renewable future for Alaska and Alaskans that demands a comprehensive and detailed roadmap. Our economy has nothing to lose from a big push in the growth of renewable energy. Our world-class fishing and forest products industries and rural communities are struggling to understand and keep up with rapidly escalating impacts from climate change,[44],[45],[46],[47] effects caused directly by greenhouse gas emissions entering our oceans and atmosphere. Alaska's mining industry will continue to be needed to supply the raw materials to build a clean energy economy, whenever recovering these from our waste stream is not possible.[48] A renewable plan for Alaska, by itself, would represent no threat to our oil and gas export industry, as the market for that resource is predominately influenced by factors beyond our control. Even Norway, which generates 98% of its electricity from renewables, remains one of the world's largest oil exporters. 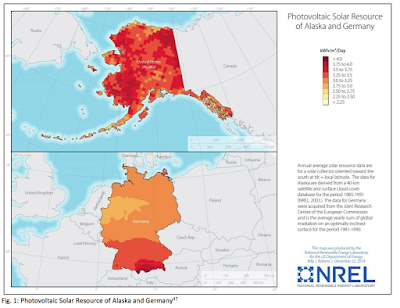 To fit real numbers to a plan, to identify efficiency potentials, prime renewable energy development and growth potential, and best practice policies and financial incentives, we need to gather state energy specialists, our utilities, and national organizations and experts like Bill Powers and Mark Jacobson together. All Alaskans should be a part of a state level dialogue about our energy future so we can discuss options, get community input, share ideas and benefit from our shared experience. It's good for the environment, good for the economy, and provides Alaskans energy free from the boom and bust cycle of the oil economy.

[11] Mark Z. Jacobson et al. (2015) Low-cost solution to the grid reliability problem with 100% penetration of intermittent wind, water, and solar for all purposes. Proceedings of the National Academy of Sciences.

[19] Child, Michael, Teresa Haukkala, and Christian Breyer. (17 Sept 2015) The Role of Solar PV in the Long-term Sustainability of the Finnish Energy System. Lappeenranta University of Technology.

[27] Scheer, Hermann and Amy Goodman. (15 Oct 2010) Hermann Scheer (1944-2010): German Lawmaker, Leading Advocate for Solar Energy and "Hero for the Green Century" in One of His Final Interviews. Democracy Now.

[49] This map was created by the National Renewable Energy Laboratory for the U.S. Department of Energy (Used by permission).